I don't how to call this one...brown rice gratin? ok.. Brown Rice Gratin. 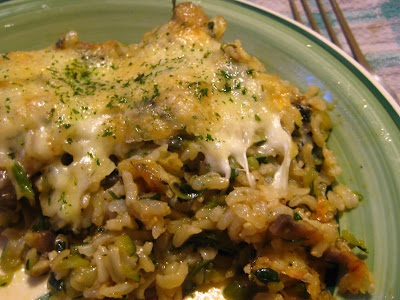 This is a perfect example of freestyle cooking. Tonight i had NO idea where I was going with this, I just kinda made this dish up as I was going along. I knew I wanted something with rice, brown rice, so as that was cooking I kinda startd chopping veggies with the intention of a stir fry, then I had the idea of turning it into a gratin. A little cheese never hurt anybody right? Everything tastes better with cheese anyway. So I think I ended up with something pretty darn good. 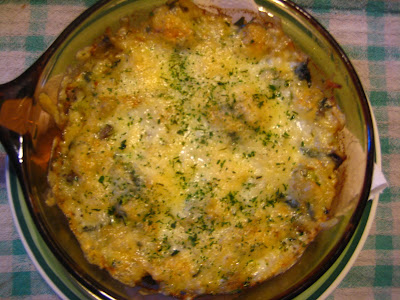 Here's how it happened:
First, I cooked the brown rice. Toasted it first in a bit of butter(unsalted butter!) and added 3 parts of water. I knew it was gonna be a little too much but that water can be used to add moisture to the stri fry. Meawhile, I shredded half a zucchini(it was a big zucchini...), chopped about 1/2 a cup of mushrooms. couple of green onions, clove of garlic and 1/2 cup flat leaf parsley. When the rice seemed to be almost done I started sauteing the veggies in grapeseed oil, added salt, pepper, paprika and cajun spices. As I had thought the rice was done with a little extra liquid at the bottom, I threw all that in and cokked for a few minutes. That would have been awsome on its own. But the cheese! So I threw the rice mix in an oven proof dish, mixed in a couple big pinches of parm in it, stirred and topped it with about 1/3 cup shredded Montrey Jack queso. In the oven at 425 for about 10 minutes to make the cheese melt,(in the meantime the dishes are done...)broil for 5 minutes to give it a crisp and voila! Oh and to be fancy I sprinkled dried parsley on top. Restaurant habits die hard...
Pretty good diner. Also, the brown rice and the cheese together make a complete protein, so it's a great vegetarian meal! 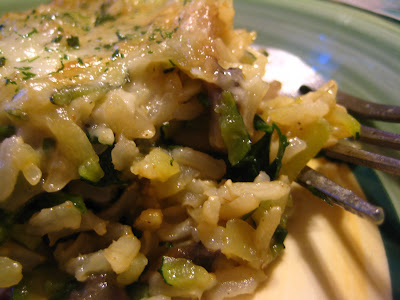