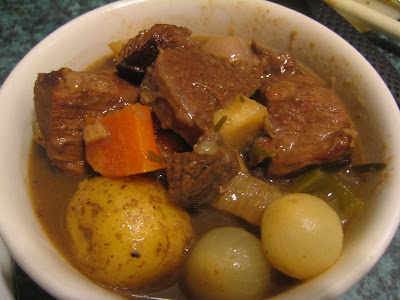 It seems there's been a lot of desserts on here lately...so here's something salty and meaty to balance it all.
I made this stew almost a week ago, on a cold rainy day. I originaly wanted to use lamb but the lamb I found at the grocery store was a bit pricy, so I got beef. Always cheap good ol' canadian beef!
Now, when I make stews I never EVER follow a recipe. Kinda like soups. There are certain methods that need to be followed but the ingredients and amounts of them and the herbs used are totally interchangeable. I don't think I've even made 2 stews that tasted the same. I love that.

SO here's how it goes:

First and foremost, cut all your vegetables so it's all ready to go. What you use is up to you. In this one I used:

Sautee all veggies BUT the potatoes in a bit of canola oil on medium-high heat until semi-soft, with salt and pepper. When done set aside on a plate while you do the meat.(...) 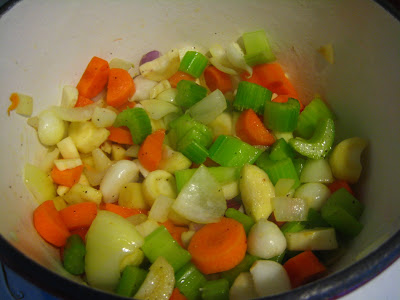 Pat the meat dry and throw in a ziploc bag with a few tablespoons of flour, shake it to cover all sides of the cubes. This will help brown the meat and will thicken the stew. Plus because the flour will be cooked ON the meat you won't taste the flour at all. Thanx Food Network as always for that tidbit of info...What would I do without that channel I don't know...
Then take the meat out of the bag, shake off any excess flour and in a heavy bottom pot(some call it "dutch-oven"), brown in oil, in batches, on all sides. 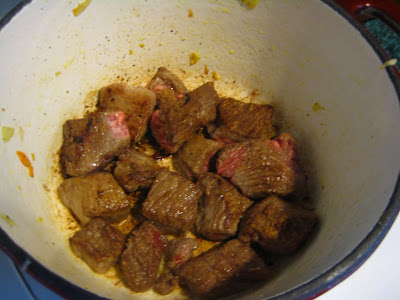 When they're all done return them to the pot along with all the veggies and some of your favorite herbs. I used 1 sprig fresh rosemary (THE #1 herb for stews if you ask me! and the fresh stuff is much more mellow than the dry...), 2 sprigs of fresh thyme and a bay leaf. Toss it all together for a few minutes and pour in 1/2 a bottle of red wine and about 1-2 cups beef broth, just up to the surface, not completely covering everything but enough so that everything has some contact with liquid. 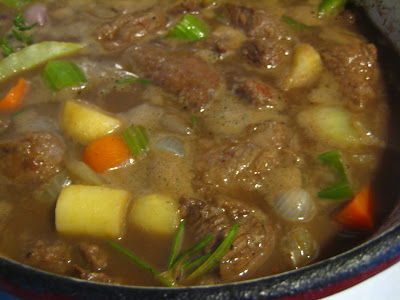 As soon as you see a few tiny bubbles appear on the surface, turn the heat down to low, cover tightly and let it go for 3-4-5 hours.
*About one hour after the stew has started simmering, add the new potatoes and check the seasonning. I added more rosemary and some black pepper...
The longer it simmers the better, acutally because stew meat is tougher and it takes time to break down the tissue. I had this one on the stove from 3:30pm to almost 8pm (I got sucked in a movie called "The lovely bones"...).
But what you get in the end is melt in your mouth tender meat: 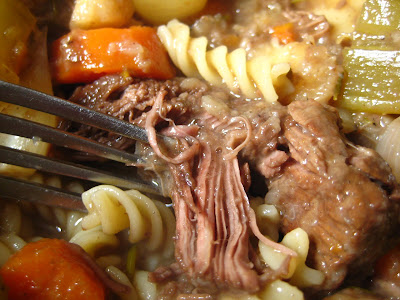 The final product is pretty darn good, the night of, yes, especially after crying my eyes out from a sappy movie,...: 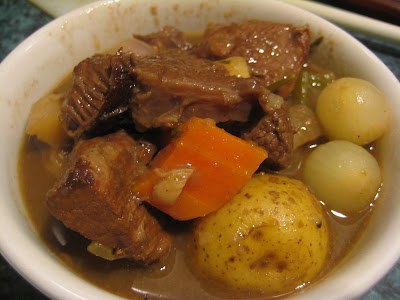 But it's even better the next day, on some fusili pasta for example: