I had no idea what to do for diner tonight. There was a little piece of salmon leftover from a few nights ago, half a zucchini and a few mushrooms about to turn, and a nice chunck of Fontina cheese begging for mercy. This called for some freestyle cooking! I didn't want to just warm up the salmon, cook some rice on the side and fry up the zucch's and shrooms. Bo-ring...So here's what I did: 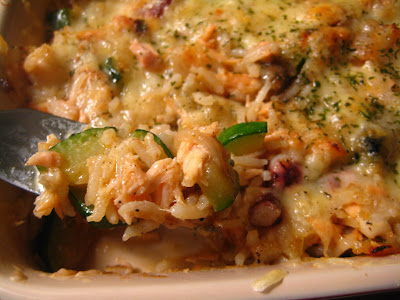 I started by cooking some rice, in a bit more water than usual so there'd be some liquid to moistened everything else later! Then I sauteed some onions, garlic, zucchinis and mushrooms in a bit of oil and butter until soft, with some salt, pepper, paprika and thyme. Meanwhile I defrosted a bit of seafood mix. Yes, a frozen seafood mix. It comes in very handy when it's winter time and fresh seafood is not really available...
When the veggies got soft I added the seafood and cooked them for a few minutes, until semi-done. Then I added the rice and the little bit of water left at the bottom of the the pot, along with the already cooked salmon and a bit of milk to tie everything together*. And a bit more salt and pepper.
*I originally thought of making a bechamel sauce but I decided to keep it semi-healthy...
All of this wonderful stuff went in to a baking dish, dotted with a few knobs of butter and got covered in Fontina and some Parmesan. 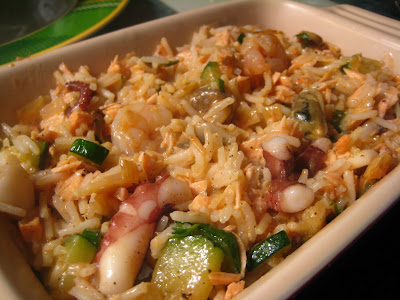 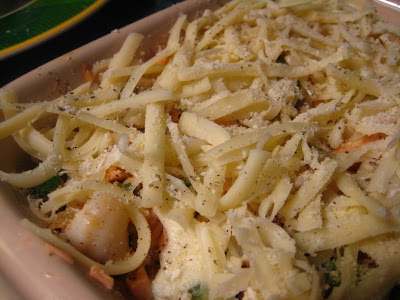 In a 450 oven it went, for about 5 minutes, then on broil until it got nice and golden. 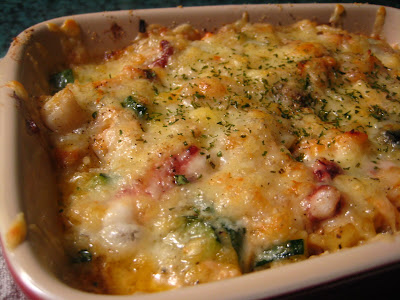 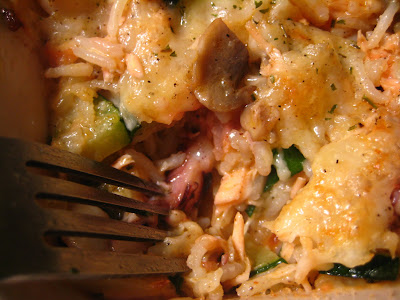