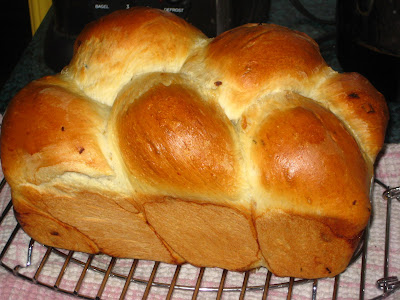 First of all, Happy New Year! This is the first post of 2011, and it's quite fitting that it's a bread recipe, since I learned to make bread in 2010 and there's SO much still to learn. I plan to bake a lot of bread and bread-related stuff in 2011. I want to try sourdough, I'd like to give a shot at fresh yeast; pizza dough and cinnamon buns are also on my to-do list. Stay tuned!
Today I had the day off, and the last loaf I bought was kinda so-so (price to pay for not making it myself...). Plus I was craving a ham&cheese sandwich so I thought I should make a fresh new loaf. I paced around the kitchen for about 15-20 minutes trying to come up with a "flavor". I wanted to keep it simple, but I wanted something new to put on this blog. Plain white bread would have been boring. In the end this bread is still pretty simple but it has a nice sweet taste, thanks to the onions. The only thing I would change would be the thyme...I didn't put enough! I love thyme and I thought it would come out but it's VERY subtle! Oh well...
Here's the recipe:

First, cook the onions in the butter and 1TBSP oil, plus salt and pepper, on medium-low heat until they're transluscent: 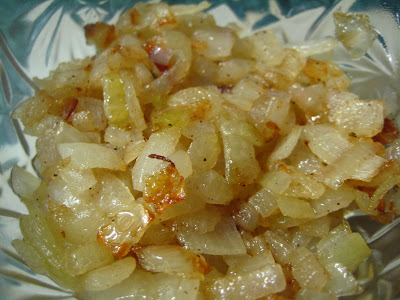 Carefull not to burn them, you want them to turn sweet but not caramelized! Actually, that might be good too but this is not what's happening this time..!
When they're cooked transfer to a little bowl and cool a bit. Also, do not throw any oil leftover in the pan! That can go in the bread too!!
Then, for the dough, mix the flour, yeast, sugar, salt and thyme in a big bowl and make a well in the center. Set aside.
Mesure out 1 1/2 cup warm water at 110-120F and add 2 TBSP oil to it. Mix and add in the middle of the flour/yeast mix.
With a fork, mix slowly from the center out and incorporate as much flour as possible to the water. It will come together in a ball, or kinda...
Transfer to a clean and floured surface and knead for 10 minutes until the dough is soft. Add the onions about half-way through the process. I didn't really need to add more flour, maybe 1/4 cup more total. When the dough is soft like an ear-lobe, put it in an oiled bowl and cover with a clean dish towel, store it in a warm place and let it rise for about one hour, until it's doubled in size.
Take out of the bowl, flatten it a bit to "de-poof" it and shape it however you want to. Here I decided to make a braided loaf, so I cut the dough into 3 fairly equal pieces, rolled them into thin logs and braided them.
Then, put the dough in a oiled loaf pan, cover with plastic wrap and let it rise again for about 40-45 minutes, again until doubled: 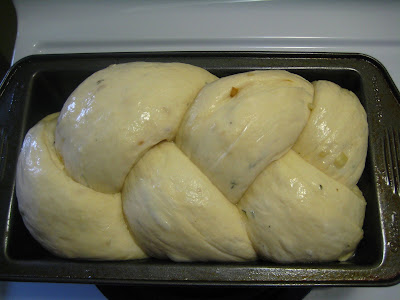 Turn on the oven at 450F, brush the loaf with eggwhites. When the oven hits the right temperature put the loaf on the middle rack and turn down to 375F. Bake for 35 minutes, until the internal temperature reads 180F, and the bread sounds hollow when tapped on the bottom.
Cool on a rack. 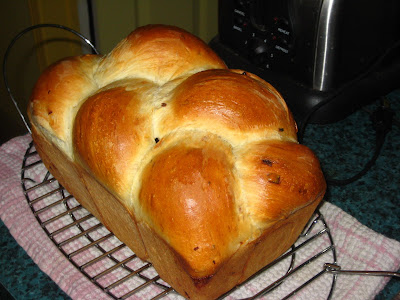 I must apologize here for the lack of the "inside view" pictures, they didn't come out right. BUT I did have a wicked ham&cheese sandwich, with Polish ham and brie cheese. 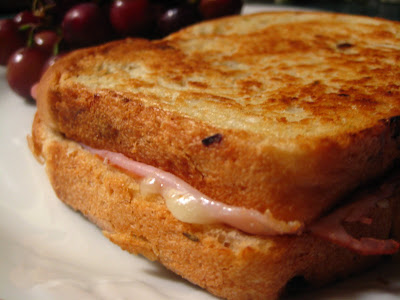 A bit margarine on both sides of each slice (yes, it's greasy. That's how I eat my grilled-cheese sandwiches!!), a little dijon mustard inside, pan-seared until golden. Yum-oh! 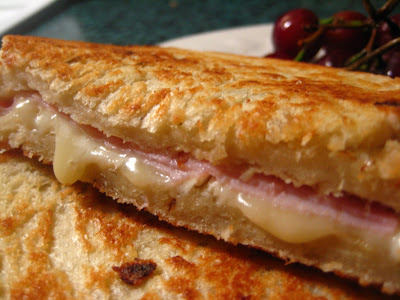 I'll send it to Yeastspotting for next week!!
Posted by Laurie at 6:11 PM