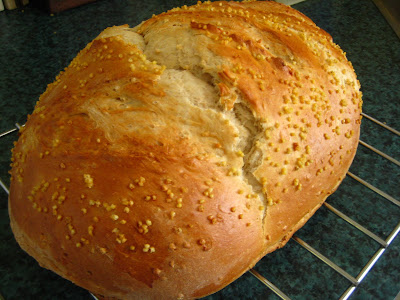 Bread of the week...it's a big one! A little too big I'll probably end up freezing half of it. But it turned out pretty nice. Very soft and tender with a touch of sweetness.
I used millet grains for something different, and because it's been a new "discovery" this past year. It's grown mostly in Africa, but we don't eat it a lot here. Too bad because it's very tasty, has a mild nutty flavor to it. I like cooking it like rice and making salads with it...there's one of those coming this week! So here I decided to try it in bread and it gave it a nice texture, and extra fiber. For the sweetness I used maple syrup, but it comes out very subtle.
Here's the recipe:

Start by cooking the millet and cool a bit. Mix the flour, yeast, salt and millet.
In a sauce pan heat up the milk, water and butter up to 120-130F. Add maple syrup and pour in the flour mix. Make sure the liquid is not over 140F or it might end up killing the yeast and the dough won't rise. And that's a big waste of flour...
Stir with a fork, transfer to your favorite kneading surface and knead away! This one got a little sticky and I ended up adding quite a bit more flour, almost 3/4 cup, but I think it's because I had too much liquid. I noticed when the millet was done there was a bit of water left at the bottom of the pot so I threw it in the milk-water-butter pot...I had almost 2 cups of liquid...little too much. Anyway, when the dough gets to the right consistency put it in an oiled bowl and rise for about one hour, until the ball is doubled in size.
Punch it down, knead it again gently and give it a shape, either for a loaf pan or baking sheet. This time I just cooked it on a sheet, for something different. Cover with plastic wrap loosely and let it rise a bit more, 30 minutes or so.
Slash it 3 times diagonnaly about 1 inch deep, brush with egg whites and if there's leftover millet sprinkle some on top. That's not necessary but it gives the loaf a snazzy look! 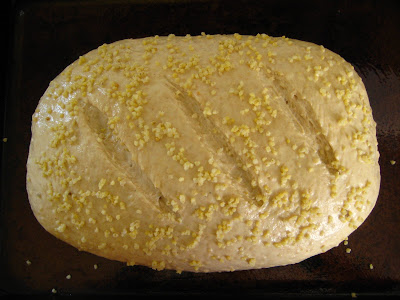 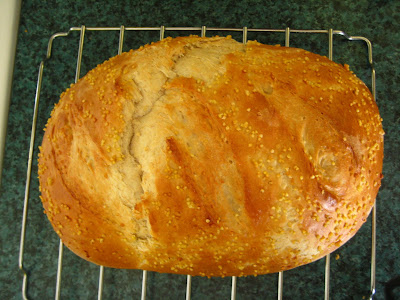 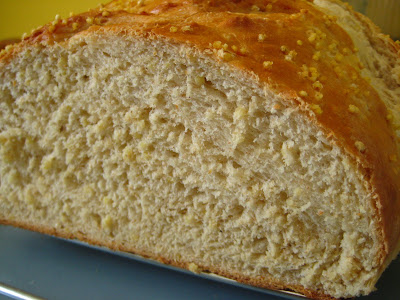