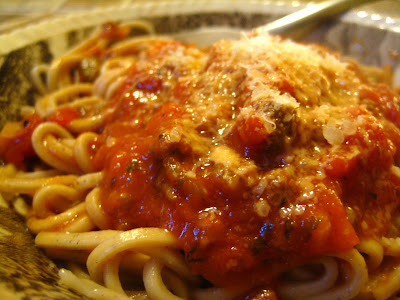 When it comes to pasta sauce, mom's always the best. It's comforting, familiar and when you're a kid what's funner than slurping a spaghetti and getting sauce all over your face?!
Today being Mother's Day I decided to make a spaghetti sauce the way she used to make it(and still does I'm guessing...it's been a while since last time I had some...hint hint for my next visit;)) Of course mine NEVER tastes the same as hers, even though I use all the same spices...I know she makes it in a pressure cooker, I don't have one of those so I just cook it slowly on the stove. But I doubt that makes a difference...
Anyway, so whenever I make this I try to re-create the sauce I grew up with, it comes pretty close but not quite. I have to admit I sometimes throw in stuff that wasn't part of the "original", like in this case a green chili pepper(partly because the thing was dying in the crisper...it needed to be used!).
Alright, here are the ingredients: 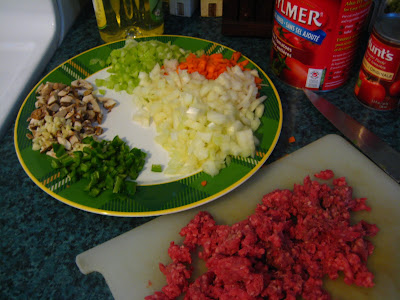 Cut all the veggies really small, or pulse in a food processor. Sautee the carrots, celeri and onions in a little bit of oil, for about 2 minutes, and salt and pepper right away. I like to season every layer of new flavor I throw in, as it comes along...Next add the mushrooms, pepper and garlic, season with paprika. Sautee for another 2-3 minutes...
Add the beef and brown nicely. 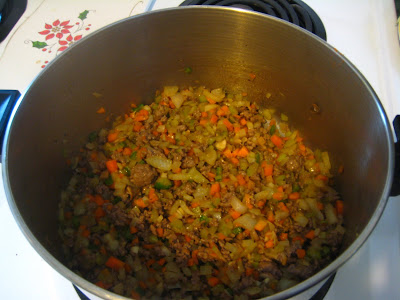 This is where a lot of people deglaze with red wine, and I sometimes do so as well, but I don't really keep wine in the house that much, and Mom never used it so this is how it is.
Pour in the can of tomatoes, sauce and season with more salt and pepper, sugar, dried chili flakes and the bay leaf. When it starts bubbling turn down the heat and simmer for AT LEAST one hour, stirring every 20 minutes or so. In the case of a nice spag sauce, the longer it simmers the better. 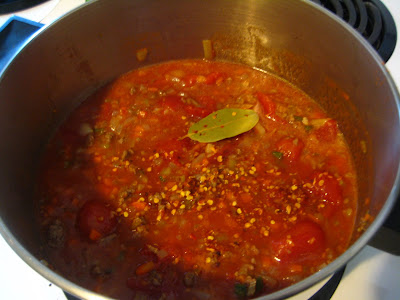 Add the tomato paste and the dried herbs near the end, about 15-20 minutes before it's done(it's a guessing game, I know, but it's pretty easy to tell...).
Adjust the seasonnings if you need to, cook some spaghetti and enjoy your comforting bowl of pasta!......well tonight I realized I was out of regular spaghetti so I used soba noodles. 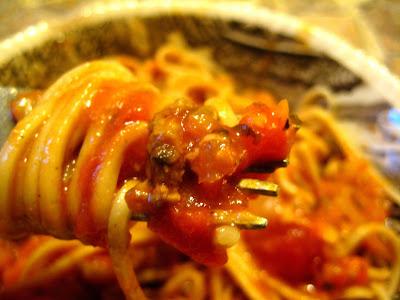 And as usual, it wasn't quite like Mom's, a tad too spicy because of the green chili and the load of chili flakes, so I added a bit of milk, slowly while stirring, to tone it down. I know it sounds weird but it worked...cream would do too!

Oh and don't forget the parmesan or top!!
Posted by Laurie at 6:05 PM