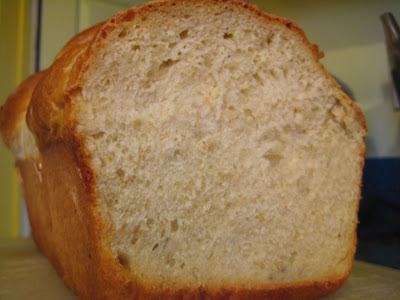 It was time to bake a bread for the week today. And once again I kinda just threw it together hoping it would be edible...and it is so nice! The apple in it doesn't really come out in the taste but it adds a nice moisture, as does the cheddar cheese. I was hoping for a stronger taste but nevertheless, this is gonna make great sandwiches and toasts.
Actually, I had a chicken salad sandwich with this bread for diner, and the "recipe" follows this one. This post here is kinda like a 2 in 1...since I don't have a whole lot of time anymore to cook, bake and post stuff on this blog, I give you 2 recipes in the same post. Aren't I generous??!
So for the bread, I got inspired by the cheddar-jalapeno bread from a month or so ago. I really liked how the cheese softens the bread. I used medium cheddar, but for a stronger taste I would use strong or extra strong cheese. The apple, as I mentionned earlier is only for moisture. If I'd had apple juice I would've thrown some in but I thought of it AFTER the trip to the grocery store...oh well...
Here's the formula:

4 cups bread flour
1/2 cup quick oats
1 1/4 tsp instant yeast
1 tsp salt
1 TBSP sugar
1tsp apple jelly(the jar was almost empty...had I thought of it ahead of time I would've bought a new jar and added a lot more...)
1 apple, peeled amd shredded (do this at the last minute to prevent the apple from browning)
3/4 cup cheddar cheese, shredded(throw in a pinch of flour in it so it doesn't clump together...)
1- 1 1/2 cup warm water, at 120F

Mix flour, yeast, salt, sugar and oats in a bowl.
Heat up the water, add jelly, pour in the flour while stirring with a fork, add the cheese and the apple and stir stir stir until it comes together in a ball. Transfer to a floured surface and knead for about 10 minutes, adding more flour or water as needed.
When it's nice and smooth, let it rest for 5 minutes, put in an oiled bowl and cover. Let it rise for about 45-1 hour.
Punch it down, gently, and shape: 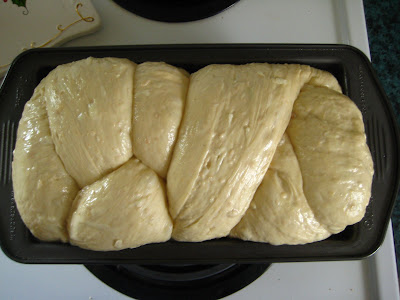 *This time I decide to do kind of a braid: cut the dough in 3 equal pieces and roll into logs. Stick the 3 ends together and braid as normal...well, as you can tell on my "before" shot, I don't remember how to braid...oh well...still looks pretty.
Put the dough in a loaf pan, or on a sheet, and proof for about 30 minutes, until it's double in size.
Brush on some egg whites (right before sending it to the oven...).
Bake at 375F for 35-40 minutes.
When it's ready it'll sound hollow when tapped on the bottom.
Cool on a rack. 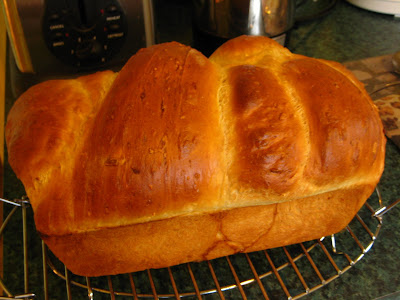 Isn't it so pretty-looking?

I'm sending it to Susan at Yeastspotting, a gorgeous website about bread and baking, showcasing a wide variety of breads from Ms.Yeastspotting herself and other bloggers passionate about bread. Love that website! Go check it out!!

Now for the second recipe...
For diner I really wanted to use that bread for something, and toasts with jam(my first choice) is not really diner so I went for a sandwich. I thought of just grilling a chicken breast and sticking it between 2 slices, but that delicious fresh bread deserved better than that. So I made a nice little chicken salad. 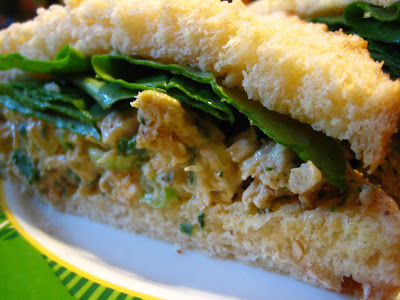 For 1 sandwich:
Heat olive oil in a pan at medium high heat. Season chicken a breast on both sides with salt, pepper, paprika, oregano and garlic power. Grill in the pan(or on the "barbi"). The way I do it is this: I throw the chicken when the pan is really hot, let it cook for about 3-4 minutes on that one side, flip it, turn the heat to medium-low, cover the pan and finish cooking it, covered. Takes about 10 minutes.
When it's done, let the chicken sit on a cutting board to allow the juice to settle, and chop into small cubes. In a small bowl, mix 1 tsp dijon mustard, 2 tsp mayo, 1 green onions, salt, pepper and dried parsley. Mix in the chicken until all coated. Slab that in between the fresh slices of apple-cheddar bread with some baby spinach and enjoy!! 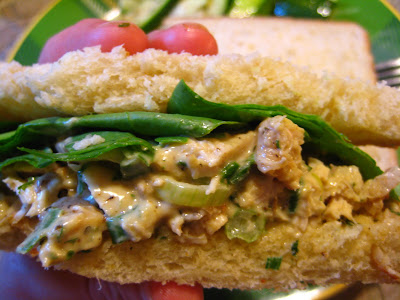 Have a great week, everybody!
Posted by Laurie at 7:07 PM