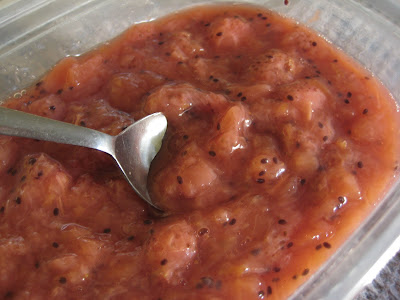 This is my second attempt at making jam. Ok, I may have not chosen the easiest fruit and I have NO idea how to make "proper" jam, but the end product is pretty good. I would call it more like a compote, though, rather than jam.
I didn't have a recipe to follow so I kinda just threw things in the pot hoping for a decent result...
Here's how it all went down:

First I peeled and chopped about 6-8 gold kiwis(they were on special at Costco...) and about 2-2 1/2 cups chopped strawberries (I always forget to mesuring stuff, sorry...). In a pot with the zest of 1/2 a lemon and its juice, splash of vanilla and 1/3 cup white sugar. Doesn't seem like a lot of sugar but I figured it would be better to add more later than too much in the beginning and the compopte being too sweet. And I did end up adding more, about 1/4 cup of honey. The end result is still very tart though, but I like tart. 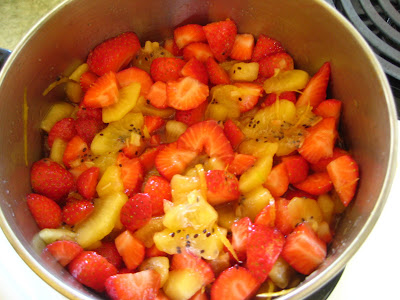 I let the whole thing simmer on med-low heat for about 30 minutes. The fruit gave out a lot of water so I had to strain it at the end. But let me tell ya...that juice was a-ma-zing once cooled! So don't throw it out!! Then once the fruit was all nice and soft I just turned off the heat and let it cool on that same element. 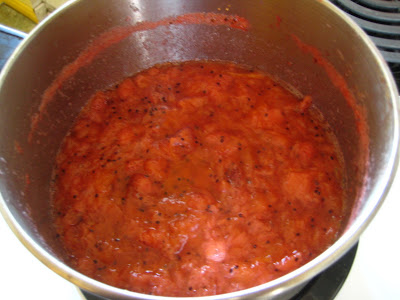 Then transfered to the fridge for a complete cool-off.
That stuff is good by itself, or on toasts, on a muffin, ice cream, etc. 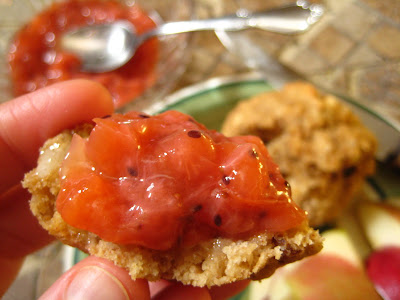 I'm pretty new at making this kind of stuff...anyone has a tip on how to make things thicken like jam without going through the long process of, well, jam making??
Posted by Laurie at 9:33 AM