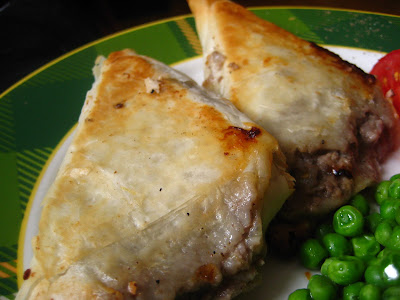 It wouldn't be Christmas around here without this traditional meat pie. All across Quebec there are many ways of doing it, and it's apperance differs form region to region. If you ask someone from Lac St-Jean and someone from Quebec City they will tell you a complete different recipe for THEIR traditional tourtiere. In and around Montreal this is how the middle looks like. But he way I "wrap" it though is kind of new. Tourtiere for us is usually done like a pie, with a flaky golden crust, and I LOVE that too, but wrapping it in phyllo like this allows me to have it many weeks after Christmas is over. Plus, I'm really not that good at making pie crust. This is safe...
When I was growing up we usually had tourtiere the way Grand-Maman Therese (paternal grandma) used to make it, with lots of leeks and 3 different meats. I've since then always made it the same. Well, this year it didn't come out exactly the same because, I believe, the leeks were a little more bland than normal. So I had to add some spices that are kinda "new" for me in this tourtiere filling. They still taste amazing though (I'm sure my grandma would approve), and I will be able to have my tourtiere fix for a while! 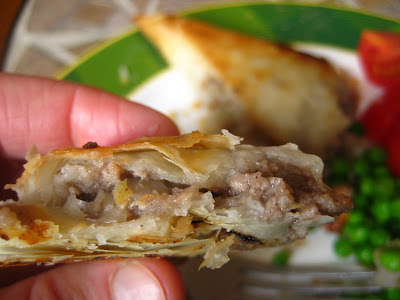 This recipe gave me 32 triangles total. And I packed them up real good, I could've stretched it a bit more. You can see on the picutres, when I cooked those 2 they kinda exploded...oh well, it's all going in the belly anyway!
It's a bit of a process making these, but it's so worth it! What I did is I cooked the mix a day ahead. That way it didn't seem like it took all day.
So first step:

Mix all of that in a bowl, get in there with your hands and make sure the meats and leeks are well aquainted. Then throw it all in a big pot and cover with cold water, almost to the surface but not quite. I needed about 1 1/2 to 2 cups water. 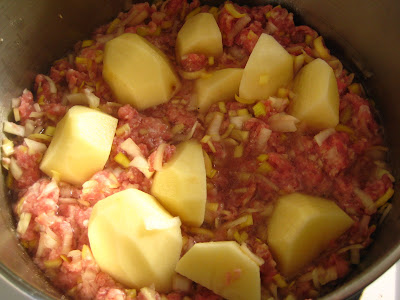 Simmer on medium-low heat for about 1 1/2-2 hours, until the potatoes are tender.
Turn the heat off, take out the potatoes and mashed them up, but not into a puree! You need to have chunks of potatoes in there!!
Return them to the meat, mix and adjust seasonning. I added more salt, pepper, and the unusual I was talking about: all-spice and bit extra ground cloves. 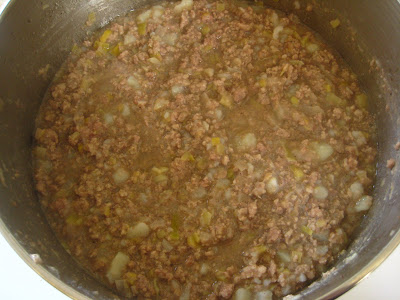 Now comes the fun part. Like I said earlier, the traditional way to make tourtiere is in a pie crust. So if you want the full tourtiere experience then go ahead with that. But here's how I've decided to put my own spin on it:
I first learned to work with phyllo a while back in Whistler, making spanakopitas with my friend Jazz(Hi Jazz!!), and that's when I realized it would be a good idea to make individual tourtieres that way. It's a process, and it takes patience and delicatness (i don't know if that's a real word, but you know what I mean..). But it's easy when you get the hang of it. The most important thing to do when you work with phyllo is to get all you stuff ready BEFORE getting the dough out. Counter clean, small bowl of oil and brush ready, mixture out of the fridge, sharp knife, humid and clean dish towel...Ok, ready.
Take out the dough, unfold it and keep to one side. Take one sheet, brush with oil gently, take a second sheet, lay it over the first, brush again with oil, then repeat with a third sheet. After taking that 3rd sheet cover the rest of the dough with the humid dish towel so they don't dry. When the final sheet is all nice and oily, cut the dough length-wise into 3 strips. Grab a spoonfull of mix and lay it on the bottom part of the strip: 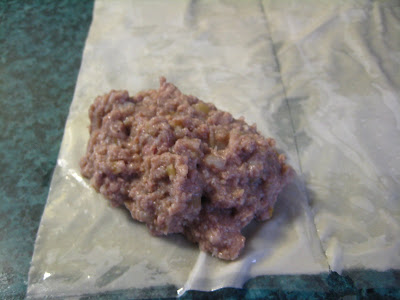 Then fold like a flag! Delicately, making sure all the filling stays in.
Once: 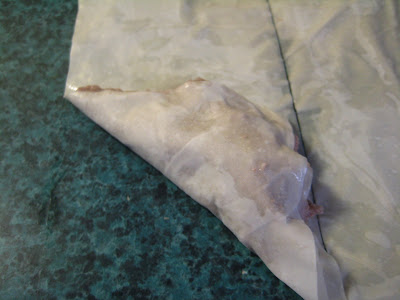 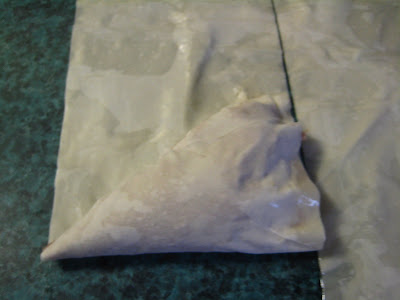 Etc...
Until you end up with a nice triangle (also lightly brush with oil): 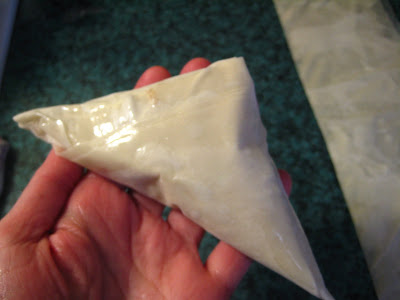 Then you just keep doing that until there's no more mix. Yes, it takes time. Put some tunes on or something! I made these listening to reggae. Island music, wrapping a traditional quebecois meat mixture into a greek-looking pastry. With a nice spanish red wine on the side. Vive la culture internationale, huh?!
Also, if you see the dough is ripping when you brush it, don't worry, the folding process will patch it all up!

After each one, I put it carefully in a big ziploc bag, ready for the freezer. I fit 16 in each bag, not touching each other too much since I want to be able to take them out one or 2 at a time!!
When you're ready to eat, get a few on a cookie sheet, and bake at 400F, about 10 minutes on each side until golden and crisp. 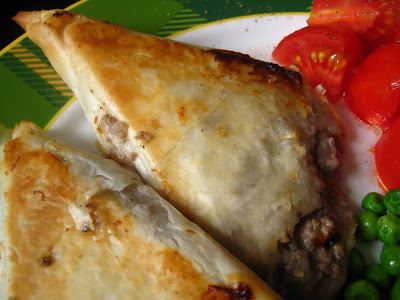 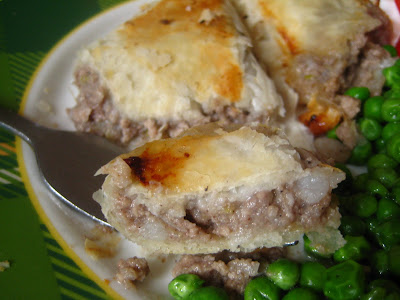