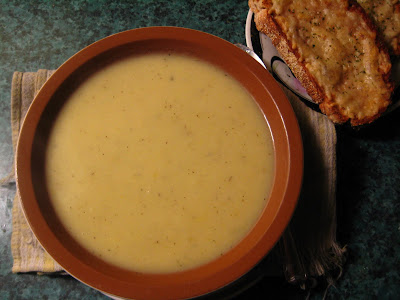 When I decided to make some touriere last week I had to buy some leeks. And of course it's cheaper to get a bunch of them rather than only 2 or 3. And as it happened they were on special, big bunches of 6 big leeks for under 5 bucks. Yippy! I immediately thought of making this soup. It's one of my favorite soups ever. Tastes really smooth for a bunch of onions! And when it's cold outside and you feel like having something velvety and comforting, especially after eating so much on Christmas, this soup is amazing. Sometimes I add chick peas to this for extra protein but not this time. I really wanted only the vegetables and that nice leek flavor.

So here's how simple this is to make. You'll need:

3-4 leeks, chopped (i only used 3 'cause they were pretty big, and also keep in mind they will wilt down when they cook!!).
3-4 medium potatoes, peeled and chopped.
1 medium yellow onion
2-3 cloves garlic
4-5 cups chicken broth
Salt, pepper, dried thyme, to taste.
1 TBSP each of butter and oil

Saute the leeks, onion and garlic in the butter and oil, on medium heat until it startes to soften. Add the potatoes, season, stir and add the broth.
Bring to simmer than turn down to med-low, semi-cover and cook until everything is soft.
In batches, puree in the blender, until it's all nice and smooth. Return to the pot, on low heat, check the seasonnings, add a bit of milk or cream if you feel like it ( I added about 1/3 cup 2% milk) and you good to go. 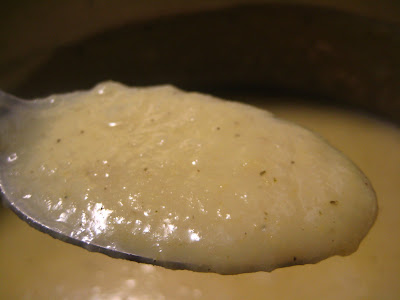 The perfect dunking item for this is a nice toasted bread with melted gruyere. Potato and gruyere and really good friends. 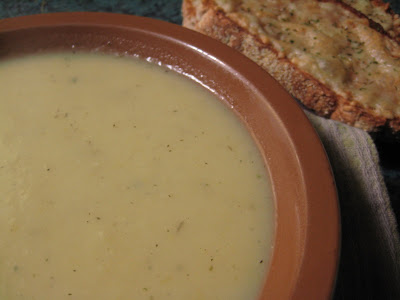 Bon appetit!
Posted by Laurie at 9:24 AM