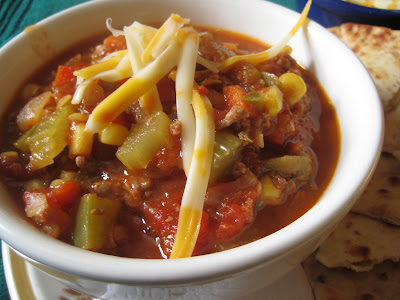 I don't know much about chili. It's never really been part of my growing up and I don't often order it in restaurants. But once in a while I like a nice bowl of spicy chili. Today, I happened to have ground beef in the fridge, ready to be cooked, and I had no idea what to do with it. Spaghetti sauce? Burger? Meat balls? meh...But as I was watching the Food Network, Jamie Oliver's show came on about chili peppers. Mmmm..., there's an idea. But I don't really buy chili peppers either. I usually keep bell peppers in the freezer cause I don't use them often. Ok, I have green peppers, not quite the same but it'll do...So I was going through the ingredient list and procedures it seemed like something I could make. I should mention this was my first ever chili, so for those of you purist out there I'm sorry if I'm breaking any chili rules of forgot something major... ;)
Here's the "recipe", it makes about 2-4 bowls, depending how big the bowl...:

Chop all the vegetables roughly. Sautee the onion in a little oil(no more than a teaspoon)for about 2 minutes, add the meat, season with salt, pepper, cinnamon and as much chili powder as you care for. Let it cook for about 2-3 minutes, but don't brown the meat. That way it'll remain moist and you won't have to simmer it all day! Add celeri, carrot, galic, pepper and tomatoes. Mix it all well.(here it seemed too thick so I added 1/4 cup of water. if i'd had tomato juice it would've been tomato juice.) Add lentils; this is the thickening agent, as well as extra protein!! Add molasses and bay leaves. Simmer on low-medium, add tomato paste and corn after 30 minutes. By then it should be almost done, I think all together for this one it took about 45-50 minutes.
Of course then all you gotta do is shred some cheese on the side, toast a nice piece of indian flatbread and dig in! 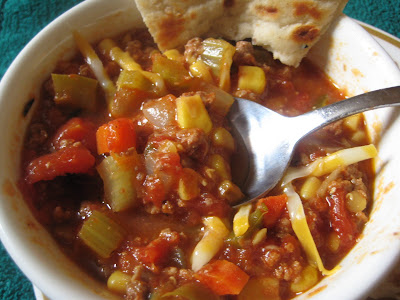